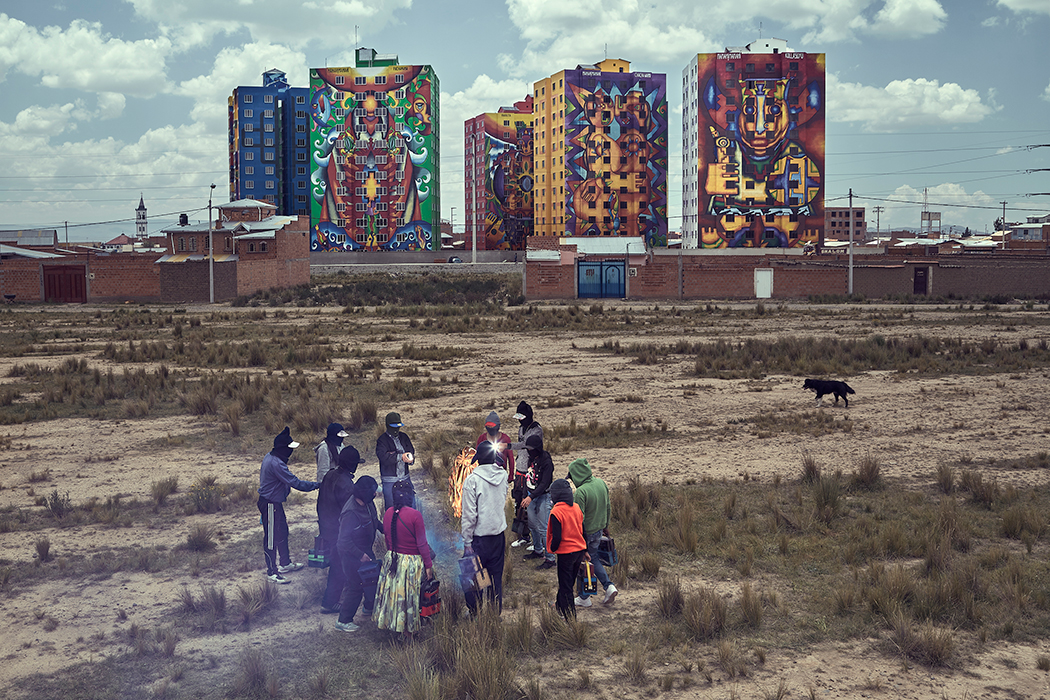 We’re proud to show the work of the following artists: Federico Estol, Uruguay Shine Heroes There are 3000 shoe shiners who go out into the streets of La Paz and El Alto

We’re proud to show the work of the following artists:

Federico Estol, Uruguay
Shine Heroes
There are 3000 shoe shiners who go out into the streets of La Paz and El Alto suburbs each day in search of clients. They are from all ages and in recent years have become a social phenomenon in the Bolivian capital. What characterizes this tribe is the use of ski masks so they will not be recognized by those around them. They confront the discrimination they face through these masks; in their neighbourhoods, no one knows that they work as shoe shiners, at school, they hide this fact, and even their own families believe they have a different job when they head down to the centre of the city from El Alto. The mask is their strongest identity, which makes them invisible while at the same time unites them. This collective anonymity makes them tougher when facing the rest of society and is their resistance against the exclusion they suffer because they carry out this work. For three years I have been collaborating with sixty shoe shiners associated with the shoe shiners newspaper “Hormigón Armado”. We planned together with the scenes during a series of graphic novels workshops including backgrounds of the new Andean architecture of El Alto. Three years of a participative essay with the shine heroes as producers and actors of a street photobook newspaper style to fight against social stigma. Today this group lives to sell the newspaper more than being shoeshiner, the art transform discrimination in a sign of struggle and survival that helps the social integration.

Arianne Clément, Canada
The Art of Aging
The Art of Aging is a photo story of sensuality in women aged 70 and over. This project owes its existence to a revelation Arianne Clément experienced when she encountered Marie-Berthe, a young 102-year-old beauty whose ease and casualness in front of the lens was as impressive as it was inspiring. Clément was immediately taken with the old woman and the way she totally – almost unconsciously – felt beautiful and attractive and wasn’t afraid to show it off.

What if beauty couldn’t be reduced to an idealized aesthetic? What if, beyond the traces left by the passage of time on our features, beauty could be something less tangible but more lasting? This vision is far removed from learned ideas and clichés commonly associated with beauty. It doesn’t have to be something that we are born with or without and neither does it have to be the privilege of youth. Beauty has to be much more and, hopefully much better, than this. It is a way of being. Something to cultivate, teach and learn from, and something that each of the eight women (and two men) that reveal themselves in this project are marvellous examples of. As models, they have been a great inspiration to Clément and it’s her hope that these portraits will transmit their anarchist spirit and maybe also a precious lesson on the venerable art of ageing.

The elders whose intimacy is revealed and celebrated here share with Clément a notion of beauty and sensuality that inspires a state of grace. Lightness and depth are here side by side in a provocative but thoroughly pleasurable display. Borrowing from the conventions of Nude and Boudoir photography, the pictures show Clément’s fascination with the human body and its great potential for emotional expression. These pictures also aim to illustrate her irritation with the very conformist way people view beauty and with the pervasive presence of certain imagery that subdue many women into body shaming and a fear of getting old.

Hossein Fardinfard, Iran
The Lost Identity
In the rural regions of Georgia, poor economic and social integrations have hindered immigrant communities since the collapse of the USSR. Particularly for those who were forced to relocate there, the competition to survive has driven niche communities away. In one tiny village, tensions continue to sprout among Russian Doukhobors, Muslim Georgians, and Christian Armenians; nearby, Georgia-based Molokans hurting for work are gradually returning to Russia, the very country that exiled them more than a century ago.

When an earthquake devastated northern Armenia in the 1980s, Christian Armenians were driven down to the tiny Georgian village from the mountainous region of Gyumri and have since drawn the resentment of their Doukhobor and Muslim neighbours. While all three groups share a history of displacement, none appear content sharing the village. Doukhobors were exiled to Georgia back in the 1840s when Russia was unable to reconcile their radical pacifism, rejection of materialism and rebuffing of Orthodox Christian rituals. Thus, when the Soviet Union collapsed in the late 20th century, Doukhobors had been farming and herding cattle in Georgia for generations. Excluded from post-Soviet revival projects, however, they were bought out of their land by Armenians and today labour in quasi-serfdom on Armenian-owned farms, enduring harsh winters, treacherous roads and limited access to fuel or freshwater.

Believing that Armenians will never cede dominion of the land, Doukhobors have begun making their way back to Russia. Muslims in the same village are likewise impoverished, having lost most of their farmland to Armenian settlers. Muslim burials and cemeteries are forbidden within village limits and bodies must be transported for miles out of town. With their complaints of discrimination ignored by the Georgian government, Muslims are nudged again and again to seek justice and opportunity in bigger Georgian cities.

David Sladek, Czech Republic
On the Culture of Protest
The UK has, in recent years, seen an unprecedented number of demonstrations. Political and social unrest originally galvanised by the financial crisis and austerity culminated in several seasons of protest on topics including Brexit, women rights and the NHS. While most media seemed to be focused on the size of the rallies and picking on the front line activists or creativity of their placards.

David Sladek wanted to look beyond the banners, deeper into the crowds and study their interaction with the streets. He discovered scores of stories – some hidden in the depths of the marches, some running in the background and others on the edges. Sladek saw children, introduced to protests by their parents, creating their micro universes while repeating chants and later resting exhausted between the scattered banners. He witnessed a vibrant cultural experience unique, perhaps, only to London and a palette of emotions far wider than anger and frustration. And, of course, he met the media – dozens of photographers and TV crews.

Many of them became familiar faces just like the activists in their viewfinders. Within the relatively short period of the two and a half years that Sladek has been visiting these rallies, the socio-political establishment has shifted by a mile. Take, for example, Brexit itself: shaking the whole of Europe to its core and dividing British society into two distinct camps. And, despite the triggered divorce and unravelling consequences, none of the opposing sides has given up their conviction. In the same space of time, women rights activists have seen numbers of previously untouchable celebrities losing their shine in rape allegations, thousands of children took to the streets to call for complete re-think of the economy to save the planet from global warming. People of Britain have spoken against racism but against immigration too they have defended their health system, fought off fashion industry and fur but also supported an ancient Białowieza Forest in Poland. Democracy is born in protest.

Henri Blommers, Netherlands
Analogue history
In a world full of digital impulses, Henri Blommers and his family drift away from the physical world. During the making of this project, Blommers drifted away also personally from his family. A period of chaos, drifting away, finding it difficult to deal with the populist, consumerist, toxifying world he found himself in.

Jorge López Muñoz, Spain
El Clot
El Clot building is an apartment block that has been under a demolition threat for the last 20 years by a City Hall plan that forecasts the demolition of 1651 homes in El Cabanyal, Valencia’s historic fishing’ neighbourhood, in order to extend Blasco Ibanyez Avenue to the seafront. City Hall has acquired several homes in the area, closing them as to wait for their demolition. For the last few years, tens of homeless gipsy families have occupied and restored some of these empty apartments in El Clot. This has put the families into the police’s and the court’s spotlight. Recently, the neighbours have come together to defend themselves and to fight against other problems that they must face on a daily basis, such as exclusion, poverty, racism or real estate mobbing.

Ma Siliang, China
Studio Practice
Photography for Ma Siliang’s practice is a paradoxical finishing, it proves and disproves the authenticity simultaneously as the shutter is clicked. On the one hand, it visualized a clue about the experience of being. But on the other hand, seeing is manipulated and restricted within the two-dimensional surface through the intervention of control and power. It makes photography become an ideal medium of ideological output where being that once complex and abundant is deducted to symbol, composition, tone, metaphor, code… and meaning is turned into a product of choice. From chaos to order, random to control, uncertainty to certainty, this authoritative way of seeing interpenetrated with politics, culture and reality itself composed the poetic of our age.