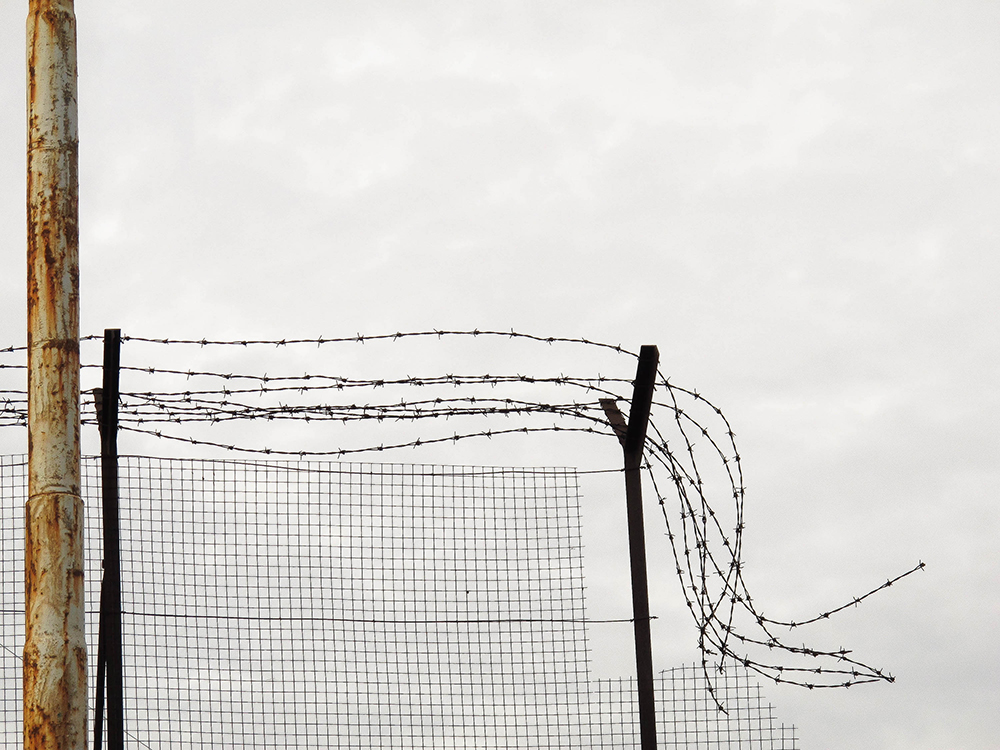 In this outdoor exhibition we're proud to show the work of the following artists: Maxime Reynie, France I am anarchist Mathieu is a guy in his early twenties, very polite and educated, living

Maxime Reynie, France
I am anarchist
Mathieu is a guy in his early twenties, very polite and educated, living with his parents in a nice apartment in a wealthy neighborhood in Paris. He is a student in computer science and a rioter. Mathieu has been an activist for years and for about 3 years has been using the Black Bloc tactic, for he wanted to intensify his fight for a better society. This ephemeral demonstration tactic is increasingly talked about in France. During the social movement of spring 2016 against the Labour Law, the Black Bloc became a major asset.

The Black Bloc now stands in front of the trade unions leading the procession of demonstrators who aren’t attached to a party or a trade union. Under their wild appearance, all of their demonstrations are carried out with a strategy and an ideology. Most of the activists in the Black Bloc believe that violence is evil, but sometimes a necessary one. The bloc now stands in front of the trade unionists in the headline procession alongside the other determined militants. As an ephemeral, misunderstood and often blamed micro-society, the Black Bloc is a radical militant strategy fighting for utopia, resorting to violence if necessary. Things are always much more complex than one might think. Underneath the hoods and images of violence are human beings. Mathieu is one voice among many others. These are all activists with their own personalities and ideals, a multitude of women and men – that is the true face of this movement.

Michael P Martin, USA
Public Spaces
Public spaces are where people let their guard down and where humanity is on show for all to see. Michael P Martin surreptitiously photographed people in public spaces when elements aligned to create a human tableau. They are travel photos yet they do not identify the place by cultural or historical details as much as use their particulars to investigate a detached, disembodied slice of time. The detachment makes the familiar strange to us.

Penelope Thomaidi, Greece
A Zone to Defend
“ZAD” in French stands for an activist occupation intended to physically block a
development project. Called officially in France the Zone d’Aménagement Différé (zone
for future development), it was renamed by protesters as the Zone À Défendre (zone to
defend). The ZAD of Notre-Dame-des-Landes in west France was the first place to be named. Local farmers and inhabitants, who had strongly opposed an airport project on their lands since the 60s, they made a call in 2008 and activists started gathering in NDDL to squat in the land with the aim to defend it “against the airport and its world”. By the beginning of 2018, approximately 300 activists had organised their lives around this protest despite the market and the state. Deeply interested in this way of life, both new and old, Penelope Thomaidi wanted to see for herself what this social experiment looked like.

In January 17th, 2018 the French government officially announced the cancellation of the airport project. But with this decision came another: the French PM also announced that the community only had a few months before they had to leave. Thomaidi had only a short time to get a glimpse of the community’s life before eviction operations started. The French newspapers calculated the cost of these operations (2500 gendarmes, armoured cars, drones and helicopters) to be around 5 million euros just in their first phase.

Thomaidi found herself inside a laboratory of constant exchange of knowledge and skills, a place of dedication and radical friendships, where members of the community defended their choices with everything they had. Today evictions have halted and negotiations with the state are still ongoing. The activists that stayed now fight for a collective agricultural project along with the historical farmers of the zone, while the French state persists that negotiations should be done only on an individual basis.

Jon Lanbroa, Spain
Anarchy without adjectives
This project combats negative stereotypical images of Anarchy. The purpose is to show that people aren’t fight for an unattainable aim or a pipe-dream. But we must fight without the use of force. It’s a visual challenge that invites the use of ideas, creativity and goodwill gestures through words and example. It appears necessary to point out that anarchy is focused on fomenting individual freedom that aims to facilitate social change. When we’re facing the threat of a world organized by relations that destroy life and generate exclusion, inequalities, and violence, we need to think about how to build a better and more hopeful world for all. To build a world where this and future generations respect cultural diversity and where women don’t need to be afraid. To build a world that’s more sustainable, where we’re promoting fair trade, making an appeal to levy taxes on capital interests, with no walls… What the majority thinks is not always right and minority viewpoints would not be the best for all. What’s good for you is not necessarily good for someone else. Everyone is different and diversity is the rule of humanity. Look twice, think three times and then react. Why not give a twist to the interpretation of Anarchy without adjectives?

Sadaf Rassoul Cameron, USA
Mabuba Sultana Rasul
Sadaf Rassoul Cameron’s mother stopped communing with nature like she did when she was a young girl back in the 50s in Afghanistan. She stopped terracing stones and burying her poop in the yard as she did in the unforgiving heat of dinosaurs and petroleum trunks of Abiquiu. She instead became nature itself. She’s root, soil, she’s Bahian oxygen. She’s bandaged together with spit balls and the rubber cement – the only thing left from every burned bridge and scorched earth. She’s molten – Tropic of Capricorn. She’s at once never here nor there, yet she’s everywhere. All. Of. The. Time. Her perfectly constructed worlds imploded in on one another and all that remained was the predictable patterns of her breath and a promise of falcon wings to carry her across the divide. First was bone, fractured under the weight of pride. Then came the rain. She coughs a parade of pink petals, a single locust, and that one thought that’s been gnawing away at her since her first born. She came from the very dirt by which she scraped from underneath her nicotine stained fingernails lifetime after lifetime and there she will return. Cameron’s mother is a refugee from Afghanistan who currently lives with asylum status in Brazil. This series is a documentary of Cameron’s mother over the many years of her seeking a sense of place after the displacement of war in Afghanistan and then the War on Terror in America. Diasporic communities have been forced to tear down their cultural walls in order to adapt. This act is itself is an act of anarchy. Anarchy is a practice – a way of life. Often it is subversive, not an overt rebellion. It can be as much psychological as it is physical. Cameron’s mother embodies the epitome of psychological anarchy. She’s spent a lifetime liberating herself from the social constructs that imprison her mind and spirit.

Laura Brichta, Germany
Some Sort of Now
The photographic series Some Sort of Now shows Brichta’s staged worlds paired with the architectural cosmos of the Spanish architect Ricardo Bofill. With their large surface area and overlapping building sections, Bofill’s work offers numerous perspectives and forms an ideal basis for a translation into Brichta’s pictorial language. Ricardo Bofill’s architecture has a way of playing with the private and social spaces of the buildings – the inner and the outer world of its inhabitants. They merge in unexpected ways and give an insight into his own interpretation of connectivity. This approach can also be found in Brichta’s artistic process. She constantly explores the boundaries between the intimate, personal and the outer rational world in search of a balance. In this series of photographs, fragments of human bodies fuse with the concrete structure of the buildings and break up the hard architecture with their curves and fragility. This creates a very personal approach to the architect’s surrealist constructions.

Carefully placed limbs, bending to frame the world that is to be discovered. Through mere fragments and glimpses they serve to illustrate the emotion of this world. The abstracted bodies are separated from their identities in order to merge with their environment. These photographs describe a utopian world in which the confining edges of the buildings seem to dissolve. The existing geometry of the architecture in interaction with the curves of the human body call into question the division of space. It is not possible to determine which walls further define the boundaries of the space and where they lead. These moments of irritation and the resulting questions accompany the photographs, preventing stagnation and giving space to individual perception. The static construct of architecture becomes an almost flowing structure in which the human body constitutes the supporting element.

Christa Blackwood, USA
Boy Play
Boy Play is portraits of young men, their bodies and faces resplendently painted in hues of pink and blue. With its focus on gender and binary colour coding, Boy Play playfully comments on the successes and failures of masculine masquerade. The work, shot in-camera with large-format film equipment, features Blake, Morgan and Richard—the same models I collaborated with for The Boys of Collodion, a black-and-white series of portraits from 2013. The make-up and blue and pink hues were inspired by a relationship I had with a deeply closeted man. Over time, I became aware of and acquainted with a number of other closeted men: men who present themselves as straight, while keeping other facets of their sexual identities hidden. The public persona each of them presents serves as a mask that allows them to be seen in contrast to their actual selves. Obviously, sexuality is much more complicated than a mere gay, bi, or straight identity. It is my hope that Boy Play reflects this complexity, in part by casting young male bodies in varying shades of color – representing the blush and blur of fluid gender and sexual identities.

In the beginning was the idea, then the fiction story of a fictional character. It’s an allegory not exactly based on Nordic mythology of trolls and fairy tales. The series of conceptual artwork of manipulated photographs, installations and video sequences. Different non-confessional formats and media rounds the creative vision of the author. From tiny like postage stamp photographs to very large formats without framing. Created over time and space without connection, but with the signs of the transition.