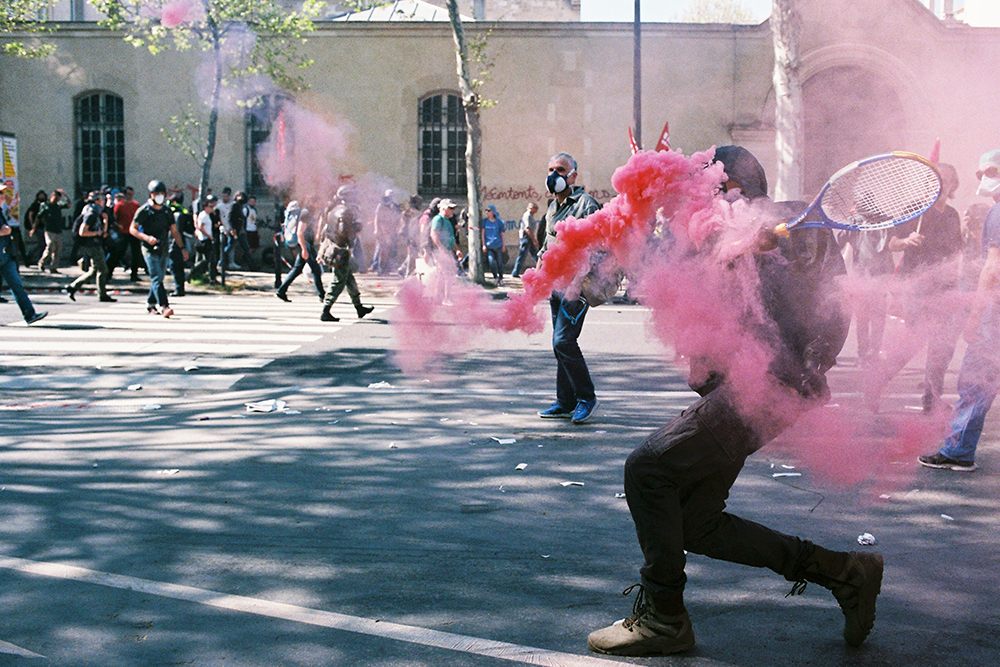 We’re proud to show the work of the following artists:

Alex Yudzon is inspired by the relationship between familiar and unfamiliar space and how the unconscious finds meaning within the objects that surround us. Because of their temporary nature, hotel rooms are perfect laboratories for exploiting these ideas. Working alone, he stacks, leans and balances furniture in configurations that range from the formal to the surreal. These sculptural installations transform the mundane familiarity of the room into a theatre of beauty and absurdity. Upturned stacks of dressers and nightstands become tribal totems. Mattresses are leaned against walls to reveal garish designs beneath the sheets.

Chairs and side tables are balanced in juxtapositions evoking modernist sculpture, minimalist installations and Bauhaus architecture. These installations are photographed in the austere black and white style of crime scene photography. After the photograph is taken the room is carefully restored to its original condition. By hiding all traces of his activity Yudzon transforms himself into the only witness and the photograph into the only evidence of anything having happened. The photographs combine a rigorous formal approach with humorous art historical references to examine our uneasy relationship to hotel rooms as centres of displacement and intrigue. By reimagining the hotel room as a stage upon which unconscious impulses are privately enacted, Yudzon’s work makes visible the hidden dreams, desires, transgressions and lonely fantasies that all rooms secretly contain.

David Arribas Gonzalez, Spain
Ansia.
The beginnings of the punk movement can be found in the late 1960s in Detroit and New York. In England, it began with great intensity in 1976 as a philosophy and socio-cultural movement. Punk was born as a consequence of the socioeconomic crisis of the western countries that left the great majority of the population in difficult conditions of exclusion, unemployment and political and social instability.
In Spain, this movement was born in 1977 as an escape of accumulated anger after the Franco dictatorship and an antireligion, anti-fascist and anti-capitalist character. It created a subculture contrary to the established system where the written medium was a fanzine and lyrics in songs were clearly against the system – all of which were means of diffusion of the anarchist movement.

When David Arribas Gonzalez looks back and tries to remember his adolescence, he cannot do it without listening to punk or rock music in the background because it’s how he grew up. For this reason, Gonzalez decided to create a photographic project about the way of life of a punky group. He talked to a punk band about the “Ansia” project and his interest in making documentary evidence of the meaning of “being punky” with a view from inside the movement.

Gonzalez went to concerts, rehearsals and meetings. He created a confident atmosphere that allowed him to almost become another member of the group. In addition, Gonzalez was interested in finding adult punks who had lived and would live forever with the punk and anarchist philosophy. He wanted to show their every day, their life (their couples, their sons and daughters, drugs, music.. show their essence) and, overall, their disagreement with the society which can sometimes get very close to hate.

David Verberckt, Belgium
The Karen, Another Burmese Minority
The Karen are an ethnic minority of Myanmar and live mainly in the Eastern region of Kayin along the Thai border and make up approximately 7% of the Burmese population. The Karen movement, led mainly by the Karen National Union, have waged one of the longest wars (starting in 1949) against the central Burmese government seeking first independence and, since the seventies, a federal system where the autonomy and the rights of ethnic minorities would be respected. During this long conflict, numerous Karen sought refuge in Thailand where over 100 000 refugees still live in camps along the border and in the cities. Karen insurgent groups control large swathes of territory in Eastern Kayin State along the Thai border and try very hard to organise their territory by providing health and education while keeping military forces ready to defend their territory and freedom.

David Verberckt is an independent reportage photographer and has studied photography at “le 75” in Brussels.

Kasa Loka, Argentina
We are not what you expect
With the turn of the century, the criminalization of protest, the persecution of youth in the midst of the neoliberal crisis and the subsequent social upheaval of 2001 in Argentina, part of the anarcho-punk movement squatted abandoned spaces in response to economic injustice and real estate speculation, in order to live and develop cultural activities for themselves and for the community. “We are not what you expect” emerges as an editorial and exhibition project of photographs that portray that reality, as a form of registry and vindication of an anarchist struggle and construction of autonomous and horizontal self-managed spaces (squatted houses) in which the inhabitants took decisions in assemblies by consensus, organized journeys and manifestations with unemployed workers, the LGTTB+ community, political prisoners; and fought against the impunity of genocides. Fanzines fairs were held on the street, and recitals and participation in “escraches” were made together with Human Rights organizations. The project seeks to interrogate about the past and the present of countercultural movements and provide a different perspective on the hegemonic representations of punk, the ways of doing politics and the links of the underground culture with other social demands. The analogical photographs that make up the project were taken between 1995 and 2008 by the members of the Kasa Loka collective (Verónica Borsani, Luzía Fernández Loiza, Paula Marinaro and Loreley Ritta), when they were between 16 and 25 years old, in the territories of Argentina, Uruguay, Chile, Mexico, Spain and Germany. They are a portrait of an era and an internationalist movement, the Latin American anarcho-punk, which was nourished by experiences of different spaces and struggles.

Emilie Royer, France
Genesis Lacrima
To go down in the street is a strong will, an uncontrolled need: The street is ours and it is necessary not to forget it, not to silence its opinions or hold back its tears. We must shout our discontent, fight against the injustices and misery we see as spectators hijacked in front of a screen. This need to meet in the street is also and above all to find this feeling of hope in contact with the procession. Unity is created between these people of all ages, all professions, all backgrounds. We are cohesion, we are possible. For that Emilie’s camera is her best ally because we are the witnesses of these conflicts, to the nearest, to the true one. In manifestation everything goes very fast, hence this fleeting desire to immortalize certain key moments that remain colorful and indelible. Between two lulls Emilie re-arms her Canon with a new film. She has in all and for all of two times, thirty-six breaks: she has no margin of error, each photo is taken with care. The choice of film in a demonstration is not a choice, she now is only making photography this way. Each gathering is organized as a team whose asphalt is the ground, the awareness and the awakening driving. Each person has his role to play and is watchful, everyone observes his comrades with kindness. You never walk alone, there is always someone to lift you up. This crowd that beats the pavement, the incandescent red of a smoke torch diffused in the smoke of the tear gas, the rage of the demonstrators, their offensive gestures: as many moments that Emilie’s memory can not remember and that only a photo can translate. The adrenaline makes her trigger the click. Her 40mm is an extension of what she sees, she watches the world carefully, she turns around and seeks to capture its natural maximum. Violence is the means and the end of the authority that is in front of the protesters, it is pernicious and invisible. Emilie is a witness to the failing memory, trying to keep some valuable traces.

Svante Gullichsen, Finland
Natural Outlaw
Natural Outlaw breaks the rules of nature and shows the hidden parts of a Nordic mindscape.
We build barricades around ourselves and while they’re supposed to protect us when we’re vulnerable, they’ll start to pile up slowly and eventually we’ll feel like we’re suffocating.

After big fights, there’s quiet calm and for a brief moment, everything feels clear. If there’s a big cold void in you, you need to escape it. Avoid it. Do not sink. Darkness and light will fight in us forever. Light finds dark in most places but there’s always a corner where the beams can’t reach.

Over time nature will take back its own. And so will human nature.

Robert Rutöd, born 1959 in Vienna, Austria. Early pursuit of painting; from 1978 on photography. Between 1979 and 1993, he wrote and directed short films. His work has been shown worldwide at numerous festivals and exhibitions and received several awards including the New York Photo Award, the Special Prize of the Czech Center of Photography and Artist of the Year at Dong Gang International Photo Festival. Books: Less Is More (2009), Milky Way (2014) and Right Time Right Place (2015).